A 68-year-old village self help group member in Odisha has been allotted the BJD ticket for the Aska Lok Sabha seat, from where party president and Chief Minister Naveen Patnaik had begun his political career around 20 years ago.

Pramila Bisoi, who has formal education till Class 3, was chosen as candidate for the seat by Patnaik over several highly-educated women, including two members of erstwhile royal families.

“In a humble tribute to the lakhs of women in our Mission Shakti movement I have declared Pramila Bisoi, SHG leader in Nalabanta village of Aska, the BJD candidate for Aska Lok Sabha constituency,” Patnaik said.

Malvika Devi had requested Patnaik for a ticket as her husband is not being renominated for the 2019 polls.

The Aska Lok Sabha seat is considered prestigious as it has been represented by Naveen Patnaik and his father and legendary Odiya leader Biju Patnaik.

Naveen Patnaik had won thrice from the Aska Lok Sabha seat, which was earlier held by his father Biju Patnaik.

Bisoi has been working for the welfare of women and children in her area in Ganjam district and her native village, Chermaria, which has now been declared open defecation-free, BJD sources said.

She is engaged in awareness campaigns for sanitation, safe drinking water, institutional delivery, vaccination, piped-water supply, plantation and protection of peacocks at Pakidi hills near her village.

Bisoi encourages children to join schools and anganwadi centres and has also worked hard for the protection of peacocks, they said. She was also awarded the Prakriti Bandhu and Prakriti Mitra awards by the forest and environment department of the Odisha government.

One of her two sons runs a tea stall at her village, while the other is a garage mechanic. Her two daughters are married and her husband Banchhanidhi Bisoi owns less than an acre of agricultural land. 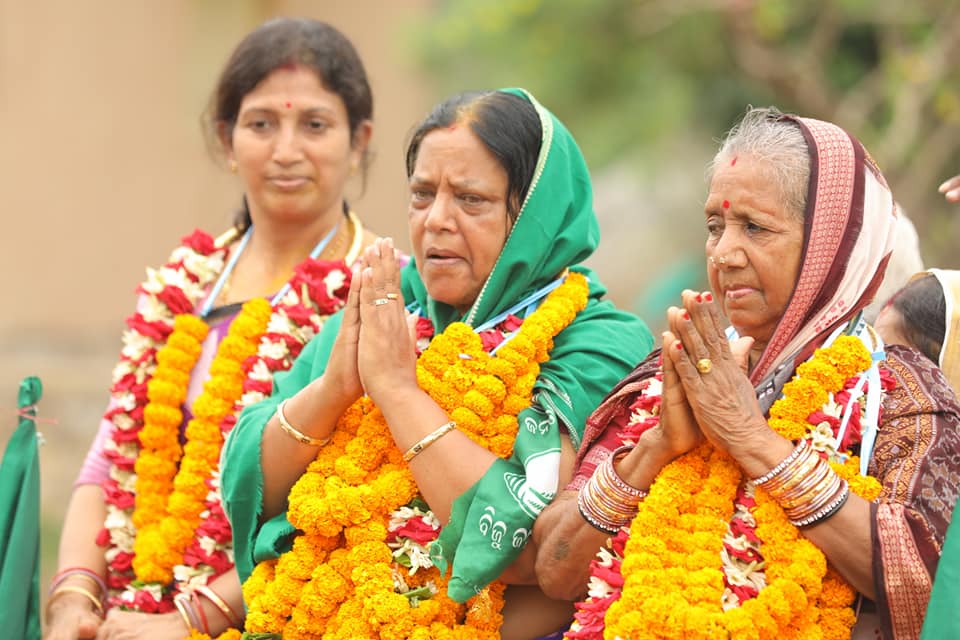 A cow munching on fodder, a bike and a bicycle parked under a tattered tin roof in its front, the small house of this Lok Sabha aspirant in Cherimaria village of Odisha’s Gamjam district bears almost a deserted look unlike the houses of arguably most of the candidates contesting the national polls.

At a time when riches have dominated the alleys of power, it is almost next to impossible to believe that the ruling party in the state has fielded social worker Pramila Bisoi for the crucial Lok Sabha polls.

Contrary to what you may think, Biju Janata Dal (BJD) chief Naveen Patnaik has put his faith in 68-year-old Bisoi to win Aska parliamentary seat he once represented in the Parliament.

Bisoi, a Self Help Group (SHG) leader, hails from a peasant family and has been a strong voice in the area on a range of issues including women empowerment, forest conservation and availability of potable water.

The social worker, who has studied up to the second standard and can speak only Odia language, outclassed the contenders for the party ticket from Aska thanks to her works for the welfare of the area.

Since she was given the poll ticket, Bisoi spends her day in meeting people in the area seeking vote and support for her election.

Bisoi asserts that she knows nothing about politics and had never imagined of contesting the Lok Sabha elections ever. She is confident of her victory and maintains that she would emerge victorious with a margin of lakh of votes.

A spark is evident in the eyes of the villagers when they talk about Bisoi’s candidature.

Jagannath Gouda, her neighbour, and a retired teacher, tells ANI, “One day she got a call from Bhubaneswar requesting her to visit the state capital. A vehicle arrived in the morning and took her to Bhubaneswar. By noon, we heard the news of her candidature.”

“I cannot explain in words how much happy we were, he adds.

Her grandson Sanjay lists her works for the area and reiterates Bisoi’s claims about her victory. Odisha Govt issues directives to shut down places of Worships